The MWPMW 19 will meet on the University of Notre Dame Campus Saturday, October 27 and Sunday, October 28th, 2018.

As usual, we will have a full day of talks and discussions on Saturday, and a half day on Sunday.

We are please to say that, once again, Mrs. Lauri Roberts will serve as our workshop manager.

If you have questions concerning lodging, special dietary requirements for either of the group meals, please contact her at Lauri Roberts. 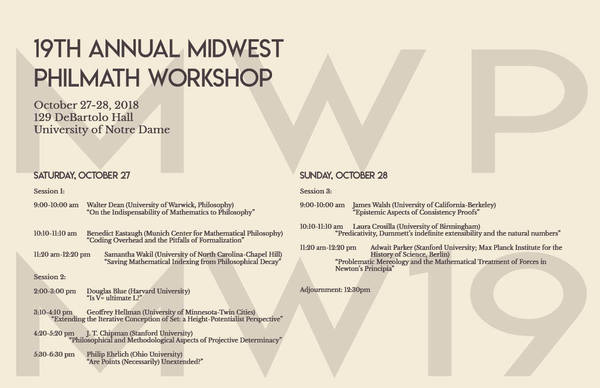 All who attend the workshop are welcome to share the noon and evening meals as guests of the university.

Please let us know for each meal whether you would like to attend.

You may indicate this when you register for the workshop, which you may do at registration

Please complete the registration form. It will help us be better organized and also help us keep better records for the workshop.

It is also a pleasure to welcome each of our other speakers and you, our guests. We look forward to seeing you soon.

Entry to Debartolo Hall, the building in which the MWPMW 19 sessions will be held, is restricted on weekends. You should plan to enter the building by the entrance on its east side. This is the side facing the football stadium, which is now largely encircled with academic and student-life buildings with different names. The one opposite the east entrance to Debartolo Hall is the Duncan Student Center.

Walter Dean (University of Warwick, Philosophy): "On the indispensability of mathematics to philosophy”

This talk will examine the prospects for formulating a version of the Quine–Putnam indispensability argument for applications of mathematics in philosophical theorizing. After briefly recapitulating the application of the indispensability argument to the physical sciences, we will propose that the framework of second-order arithmetic (and in particular the sorts of formal systems studied in Reverse Mathematics) is well suited to formulating many cases in both the empirical and philosophical settings. To substantiate this claim, we will examine several arguments drawn from philosophy of language, formal epistemology, and modal metaphysics, which we will suggest rely on (and in some cases are provably equivalent to) mathematical principles which can be formalized in this setting. On the basis of such case studies, we will consider the following morals: i) that Reverse Mathematics gives us a useful way of understanding the degree to which mathematics is indispensable to philosophical theorizing; and ii) many discussions of set-theoretic commitment in both scientific and philosophical theorizing may be usefully recast in computability-theoretic terms.  This is joint work with Benedict Eastaugh (LMU Munich).

Reverse mathematics purports to demonstrate what axioms are necessary in order to prove theorems of ordinary mathematics: real, complex, and functional analysis, countable algebra, infinitary combinatorics. This involves formalizing the basic notions of these fields in the language of second order arithmetic, thus limiting what can be formalized to mathematical objects which admit of countable representations or codes. That a formalized counterpart of an ordinary mathematical theorem such as the Heine-Borel covering theorem implies the set existence axiom WKL (weak Konig's lemma) is usually glossed as ``WKL is necessary to prove the Heine-Borel covering theorem". But to justify the use of this gloss, and indeed the central claim of reverse mathematics to be determining the axioms necessary to prove ordinary mathematical theorems, the coding involved in the formalization of these theorems in second order arithmetic must satisfy certain conditions that ensure their faithfulness. In particular, the coding should not aect what axioms are necessary to prove a given theorem. In this paper we study the coding overhead of additional principles that are necessary to prove the extensional correctness of a coding, and argue that several codings used in reverse mathematical practice fail to be faithful when evaluated in the context of specic theorems from real analysis and general topology.

According to the indexing account, mathematics can only map or ‘index’ physical systems in the sciences. This is diametrically opposed to the view that mathematics sometimes plays an explanatory role in science.

The indexing account faces three main criticisms: (1) It’s not clear mathematics can index in complex scientific cases; (2) Indexing proponents have not undermined the paradigm cases of seemingly genuine mathematical explanations of scientific phenomena; (3) The exact details of the indexing proposal are underdeveloped and is therefore philosophically impoverished.

I defend the indexing account against (1) by offering an example involving particle decays and the use of the uncertainty principle, thus illustrating the indexing function of mathematics in a complex case. I respond to (2) by undermining the purported explanatory role of mathematics in several well known examples, most notably the the Lorentz contractions. Finally, to rebut (3) I provide a novel and detailed characterization of the indexing account as a form of analogical reasoning.

We discuss mathematical evidence from the inner model program and large cardinal theory for the candidate set theoretic axiom V=Ultimate L. The hypothesis V=Ultimate L is unique among axiom candidates, for its tenability depends foremost on the truth of a constellation of mathematical conjectures. A philosophically important feature of this circumstance is that one of the conjectures, the Ultimate-L conjecture, is an existential number-theoretic conjecture. We discuss this in part 1, in which we also build up to the formulation of the axiom itself via a whirlwind account of inner model theory.

Part 2 is devoted to discussing theorems proved with large cardinals which approximate sharper theorems provable under V=Ultimate L. The talk then becomes more speculative. We raise the question of whether the theory of the core of the generic multiverse, the collection of all forcing extensions of V, is ZFC + Large Cardinals + V=Ultimate L in part 3. A positive answer would, in our opinion, be strong evidence for the axiom. We close in part 4 by discussing plausible mathematical scenarios which would refute V=Ultimate L. Accordingly, much of the following is tentative but, we think, of philosophical interest. In particular, we will address the question ``In what sense is V=Ultimate L an axiom?'' throughout the talk.

In his well-known, influential essay, "The Iterative Conception of Set", George Boolos simply assumed that there are infinite limit stages, i.e. he didn't derive the Axiom of Infinity from his axioms on stages; and, far from deriving Replacement, he came to doubt that it is even "true" (i.e. in "the real world of sets", to which he seems to have been committed). In this talk, we describe how simple axioms on stages can be added to Boolos' to derive both Infinity and Replacement. Interestingly, these derivations are available in a "height-potentialist" framework, deploying modal logic + logic of plurals; they conflict, however, with a "height-actualist" view (Boolos', we suppose), committed to a fixed universe of all stages and all sets. Finally we review two further results achievable within a height-potentialist framework, viz. motivating small large cardinals, and providing attractive resolutions of the set-theoretic paradoxes.

John Steel writes that Projective Determinacy (PD) is the ``instrumentalist's trace'' of large cardinals in the language of second-order arithmetic. The purpose of this talk is explain some of the philosophical and methodological significance of this quotation. I proceed by way of (selectively) examining the historical and technical development of Descriptive Set Theory (DST), beginning with some of the results of the French Analysts from the early 20th century and ending with Steel and Martin's proof of PD (1989). I emphasize the ways in which DST's development was motivated by the concerns of ``ordinary'' (i.e., non-foundational) mathematics.

Ever since Euclid defined a point as “that which has no part” it has been widely assumed that points are necessarily unextended. It has also been assumed that, analytically speaking, this is equivalent to saying that points or, more properly speaking, degenerate segments—i.e. segments containing a single point—have length zero. In our talk we will challenge these assumptions.

We will argue that neither degenerate segments having null lengths nor points satisfying the axioms of Euclidean geometry implies that points lack extension. To make our case, we will provide models of ordinary Euclidean geometry where the points are extended despite the fact that the corresponding degenerate segments have null lengths, as is required by the geometric axioms. The first model will be used to illustrate the fact that points can be quite large—indeed, as large as all of Newtonian space—and the other models will be used to draw attention to other philosophically pregnant mathematical facts that have heretofore been little appreciated, including some regarding the representation of physical space.

Among the mathematico-philosophical conclusions that will ensue from the above talk are the following three. (i) Whereas the notions of length, area and volume measure were introduced to quantify our preanalytic notions of 1-dimensional, 2-dimensional and 3-dimensional spatial extension, the relation between the standard geometrical notions and the pre-analytic, metageometric/metaphysical notions are not quite what has been assumed. Indeed, what our models illustrate is that, it is merely the infinitesimalness of degenerate segments relative to their non-degenerate counterparts, rather than the absence of extension of points, that is implied both by the axioms of geometry and these segments null lengths.

(ii) As (i) suggests, the real number zero functions quite differently as a cardinal number than as a measure number in the system of reals. So, for example, whereas a set containing zero members has no member at all, an event having probability zero may very well transpire, and perhaps more surprisingly still, a segment having length zero may contain a point encompassing all of Newtonian space.

(iii) Physicists and philosophers alike need to be more cautious in the claims they often make about how empirical data determines the geometrical structure of space. Indeed, without additional geometrical assumptions, which their writings typically show no cognizance of, the evidence that is often appealed to is compatible with an array of distinct geometrical spaces. For example, as three of our models collectively demonstrate, even if one could have good experimental evidence that the sum of the interior angles of some (any) triangle in the plane is 180°, this would be entirely compatible with (a) an Archimedean Euclidean space, (b) a non-Archimedean Euclidean space, (c) a non-Archimedean hyperbolic space, (d) a non-Archimedean elliptic space, (e) a non-Archimedean semi-hyperbolic space that is not hyperbolic, (f) a semi-elliptic space.

We believe this has interesting implications for traditional philosophical disputes regarding the epistemology of geometry including the classical dispute between empiricist and conventionalist philosophies of geometry. We will conclude our talk by drawing attention to the latter.

James Walsh (University of California-Berkeley, Group in Logic and the Methodology of Science): “Epistemic aspects of consistency proofs”

Gentzen offered a consistency proof of arithmetic, but it is controversial whether this proof convincingly addresses skepticism. I argue that Gentzen's proof demonstrates why arithmetic is consistent, regardless of how it affects our credence that arithmetic is consistent. On this basis, I argue against certain restrictive norms on mathematical practice. In particular, one might believe that any epistemically significant consistency proof must use only those restricted methods that have dialectical force against skeptics. I argue that consistency proofs ought to incorporate a broader spectrum of mathematical techniques, as long as those techniques contribute to our explanatory goals.

Newton's Principia (1687, 1713, 1726) met strong resistance to its fundamental result that every two particles mutually attract directly as their masses and inversely as the squares of their distance.  On the received historical account, resistance primarily focused on the mechanical inexplicability of action at a distance.  Correlatively, scholarship has concentrated on the delicate ontology of Newtonian force, avowedly not essential to matter and yet universal and real.  We present new evidence from his 1684-5 manuscripts showing Newton concerned to stave off a different evidential controversy, one he correctly anticipated from his sharper readers (viz., Huygens). Newton lacked empirical evidence for a central mathematical premise in his deduction of universal gravity: that the whole attractive force toward a body is composed of lesser forces toward all its parts.  We will examine why the mereology expressed by this premise is so problematic, and what indirect mathematical and analogical evidence spoke on its behalf.